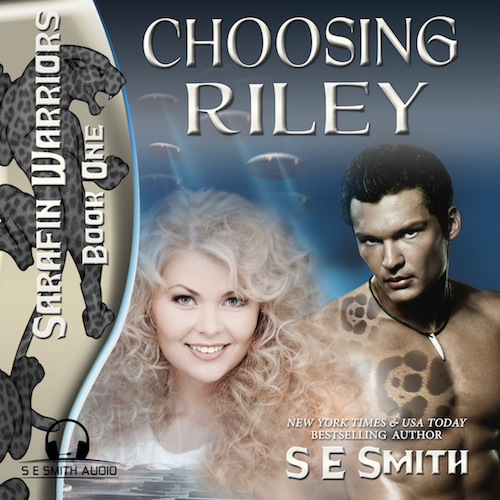 A smart-talking bailbond’s woman and an alien king clash in a hilarious battle of the sexes while on the run. All’s fair when it comes to love!

Riley St. Claire has always followed her own rules. When she discovers her current employer is not as law abiding as she thought, she has to leave town in a hurry or end up buried with the dead guy she discovered. What she doesn’t expect is to find herself being picked up by a passing trader from another world.

As the ruling King of Sarafin, Vox d’Rojah, was expected to produce a son who would be joined in marriage with the first born daughter of the King of Valdier. The problem was Vox had no intentions of having any sons, at least not in the near future. He was quite happy with the wide selection of females he had at his disposal. When he is captured by a ruthless Valdier royal and sold to a mining operation the last thing he expected to find with his bride mate.

Vox isn’t sure which would be easier: fighting another war with the Valdier or capturing and holding onto the human female who is unlike anything he has ever encountered before.

The King of Sarafin has met his match with Ms. Riley St. Claire from Earth. Now, he just needs to figure out a way to let her know he has chosen her as his Queen and he has every intention of keeping her by his side forever.

She quickly finished putting her hair up, trying not to turn as pink as the scrunchie as she watched their eyes follow her breasts as they bounced up and down. She didn’t care how much support the manufacture promised; when you were as big as she was there was still going to be some bounce. She lowered her eyes, refusing to give into the desire to cross her arms protectively in front of her. The only thing that did was push up the watermelons she carried around. Instead, she clapped her hands loudly.

“Hello?” she snapped, shooting an evil eye at Lodar and Tor. “It’s rude to stare!”

Lodar cleared his throat as Vox turned to glare at his two friends. “Yes, well… I… We… They are beautiful,” he finally choked out with a sheepish grin. “And very difficult to miss.”

“I wonder if they contain milk.” Tor asked, unaware he asked the question out loud. “I would love to drink from them if they did,” he sighed.

Riley’s mouth dropped open as what Tor said sank in. “Oh. My. God. You did not just say that,” she sputtered before bursting into uncontrollable laughter. “Do they… Oh my god, that is priceless.” She continued to giggle, wiping the tears from the corner of her eyes with the end of her shirt, totally unaware the movement pulled the cloth up, exposing her creamy flesh again.

Vox’s loud roar ricocheted throughout the small room as he tackled Tor. The force of his shoulder hitting his chief engineer’s chest knocked both of them backward through the air several feet before they hit the hard floor and slid almost to the far wall. Vox’s sharp teeth gripped Tor’s throat in a stranglehold while his claws dug into Tor’s shoulders, pinning him to the floor.

“Bad kitty!” Riley shrieked out from behind him. “Let him go! You are a very, very bad kitty. You let go of him, or I’ll neuter your ass. Vox, release him this instant. If you don’t, I swear I’ll go to the guards and tell them I need to borrow their stun gun thingy. I mean it. I’m out the door in three, two, one…”

Choosing Riley #12 – 50 Self-Published Books Worth Reading
I was excited to have been nominated for Choosing Riley in The 50 Self-Published Books Worth Reading (2013/14). And I[...]
Read More
Are You Writing More Sarafin series and Grandma Pearl stories?
https://www.youtube.com/watch?v=3oO2PSgA56Q
Read More
Heart of the Cat
Heart of the Cat Sarafin Warriors Book 3 Assassins, traitors, and a goddess with a guiding hand culminate in more[...]
Read More