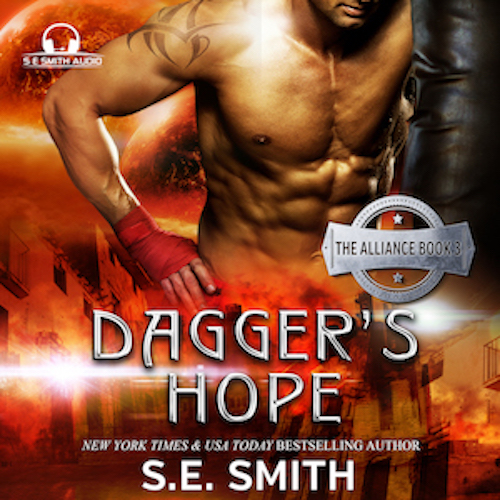 One human woman’s determination stretches across the star systems in a race to save the alien warrior who has captured her heart.

Jordan felt tears burning her eyes as she stepped out from under the canopy. She walked over to the crystal clear pool of water and stared down into it. She saw her reflection. The water shimmered and rippled, but she could make out her father’s hazel eyes that she had inherited and her mother’s small nose and full lips.She had a scattering of freckles across her nose from playing outside in the sun and had never quite lost them after that. She wasn’t beautiful, like Dagger said. Raising her hand, she smoothed back her hair when it blew in front of her face. When she looked again, Dagger was standing beside her, gazing down at their images.“So much has happened, to both of us,” she reflected quietly. “When I look at my reflection, I still see my mom and dad. It gives me strength, knowing that they are still with me, in my heart, a part of who I am.”“What do you see when you look at me, Jordan?” Dagger asked in a somber voice. “Do you see the scars of a warrior? Do you see the heart of a killer?”Jordan smiled and tears blurred her vision for a brief moment. “I see a man, a warrior, who came out of the darkness and carried me away from the cold. I see a man who warms my heart and makes me feel safe.” She turned and took a step closer to him. Raising a hand to his right cheek, she ran her fingers tenderly along the scar. “I see a man who I would follow to the ends of the universe because he makes me feel complete. I see you, Dagger, and I have never seen anything more beautiful in my life.”Tears glistened in Dagger’s eyes as he stared down a Jordan. The beast that feared to trust, that fought to survive, calmed inside him as his mate, his Amate, touched him with the warmth of her love and healed his battered soul. His throat worked up and down before he closed his eyes and pulled her into his embrace, holding her like he would never let her go, and he wouldn’t. She was the reason he had lived. She was his hope.