Category Archives for "Pets in Space 4" 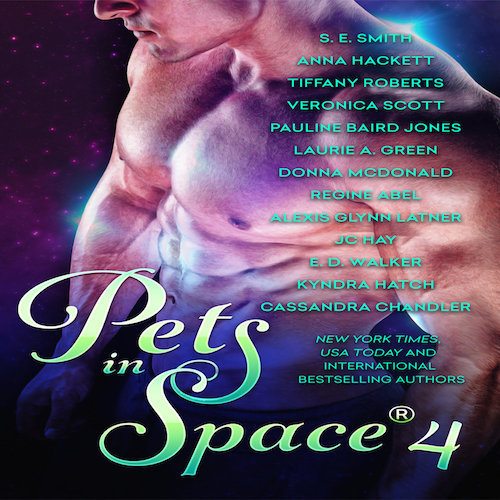 Grab your copy of Pets in Space® 4 today!

For a limited time, Pets in Space® 4 brings together today’s leading Science Fiction Romance authors to help Hero-Dogs.org, a non-profit charity that helps our service veterans and first responders.

Journey to far off worlds with Anna Hackett’s House of Roan or board Veronica Scott’s Nebula Zephyr for another amazing Interstellar cruise. From S.E. Smith’s Lords of Kassis, Tiffany Roberts’ The Infinite City, to Pauline Baird Jones' Project Enterprise series, you’ll find the perfect story along with a few unusual pets.

For a limited time only! Pets in Space® 4 is proud to present 13 amazing, original new stories! Join the adventures as today’s leading Science Fiction Romance authors take you on a journey to another world. Pets in Space® 4 proudly supports Hero-Dogs.org, a non-profit charity that provides service animals to veterans and first responders in need.

MADAS' FALLING STAR
Lords of Kassis Series
by S.E. Smith
Even an incredibly skillful warrior Princess needs help sometimes. Can Madas trust the strange warrior who fell from the sky with her life… and with her heart?

DARK GUARD
Galactic Gladiators: House of Rone Series
By Anna Hackett
A cyborg who's vowed to keep his emotions and lethal powers leashed, discovers the one woman who can bring him to his knees.

ENTWINED FATES
The Infinite City Series
By Tiffany Roberts
Being separated by time and distance does not lessen the love Volcair has for the woman who captured his heart.

STAR CRUISE: IDOL’S CURSE
The Sectors SF Romance Series
By Veronica Scott
Two crew members of an interstellar luxury liner must join forces with a retired military canine to find a missing relic before the curse brings disaster for everyone.

SPYDOG
The Inherited Stars Series
By Laurie A. Green
An agent must decide if he can trust the savvy female Rathskian warrior that crosses his path or if he should deliver her to his superiors.

NOTHING REMOTELY FAMILIAR
My Crazy Alien Romance Series
By Donna McDonald
Nothing is normal when Topper finds herself expecting again.

DOOM
Xian Warriors Series
By Regine Abel
A genetically engineered war machine finds love with the human doctor who may be his only chance of survival.

WINTER'S PRINCE
Starways Series
By Alexis Glynn Latner
A scientist looking for a genetically engineered unicorn and a historian seeking the right question find each other in an interstellar amusement park full of dangerous games.

HEART OF THE SPIDER'S WEB
TriSystems: Smugglers Series
By JC Hay
The last thing Sheri needs is a brooding, brawny smuggler watching her every move, but his help is all that stands between her and a crime lord's wrath.

THE PRINCESS AND HER BODYGUARD
Alien Animal Rescues Series
By E.D. Walker
A kidnapped princess and her bird companion must rely on the exiled guard who loves her to help them.

INTERRUPTING STARLIGHT
After The Fall Series
By Kyndra Hatch
The human composed a song in his heart, a pull he couldn’t ignore, a draw that demanded further exploration.

IMPORT QUARANTINE
The Department of Homeworld Security Series
By Cassandra Chandler
A simple house call to care for a sick animal turns a young woman’s life upside down when she discovers the ‘house’ is really a spaceship!

Teaser from Madas' Falling Star, my story in Pets in Space® 4
Prince Gril Tal Mod is destined to be the next Supreme Leader of the Tearnats—if he survives long enough to ascend to the throne.
Gril was supposed to be on a routine training exercise, but his flight goes horribly wrong when engine trouble forces him to land his fighter in a remote mountainous region. Once stranded on the ground, Gril discovers the malfunction was no accident—and he isn’t alone. He can sense someone watching him from the shadows.

Princess Madas Tralang’s curiosity always seems to get her into trouble. When Madas spies an unusual object streaking across the sky before crashing near her location, she believes it is a good omen. After all, she found her pet, L’eon, the last time an object fell from the sky. Her hopes of finding something of value this time are dashed when instead she sees it is nothing more than a big, and rather ugly, Tearnat warrior. Despite her disappointment, she is drawn to the stranger—or should she say his spaceship! The spaceship is just what she has been searching for—a chance to escape the dreary life expected of her! Madas soon finds herself locked in a battle of wits and skill with the strange warrior, but they are not the only players on the field.

Danger surrounds Madas and Gril—both from her clan and from the saboteur who is determined to see him dead. Can the Prince of the Tearnats and a small, but deadly alien pet, defeat their foes and save Madas before time runs out, or will Gril’s growing love for a curious Princess doom them both?