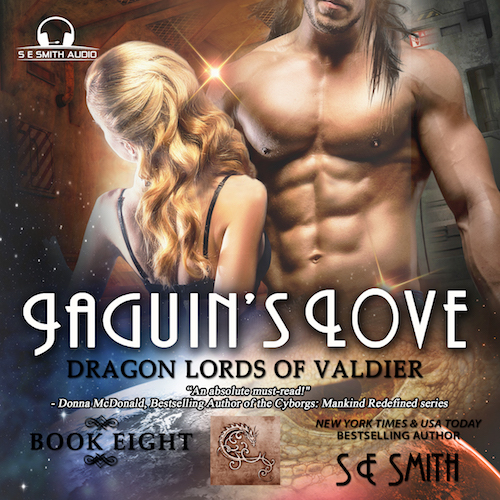 Writing on Jaguin’s Love is going well and I’m really liking how the story is going. It is turning out different (in a good way) than I was expecting. Sara is really a unique character.

As for a release date, I am looking at an end-May release.

Jaguin’s Love book cover has had an update and here it is:

What do you think of the video component to the book cover? It really catches your eye, don’t you think?!

Who is up for a teaser? Here is an unedited one for you:
Jaguin started forward, his gaze automatically moving to where the woman lay silently on the bed. He could see the thick bands of gold on her neck and wrists. His symbiot sat on the far side of the bed, its head resting on the pristine white sheets. Small threads of gold wove outward, replacing the narrow ribbons still moving over her body.
“It is a good thing you are her mate,” Tantor replied in a quiet voice, walking past the two beds toward the office area to the left. “She would not have survived if not for your symbiot’s ability to heal her. Our medical advancements are far greater than most, but nothing can heal the body the way a symbiot can.”
“What of the other woman?” Gunner asked with a frown. “She is not mated.”
“She had a concussion, as well as other injuries,” Tantor admitted with a shake of his head. “I was able to heal most, but not even our symbiots can heal a broken mind or soul. The female was awake, but she never spoke or responded. It was as if only her body were here, nothing else. I only have the evidence of what was done to the females on a physical level and can guess what was done to them on a mental one. Time will tell if they will survive.”
“The one has to,” Jaguin retorted, glancing through the clear glass back at where his mate lay. “She… She is mine.”
Tantor’s gaze followed Jaguin’s to the peaceful face. “I know,” he murmured. “You will need to be patient, Jaguin, until she wakes, I can only guess at what damage may have been done to her mind.”
Jaguin’s gaze remained locked on the young woman’s face. He didn’t even know what to call her, just his mate. She looked like a pale statue. Her breathing so slight that he could barely see her chest rising and falling. His symbiot moved closer, nudging one slender arm. Hope and determination flared inside him when her arm slid over the golden head. He knew that it had been the movement of his symbiot that caused her arm to move, but not her fingers. Warmth flooded him when the woman’s fingers curled ever so slightly into the silky smooth body of his symbiot.
“I will wait however long it takes,” Jaguin replied, feeling the rightness of his words.