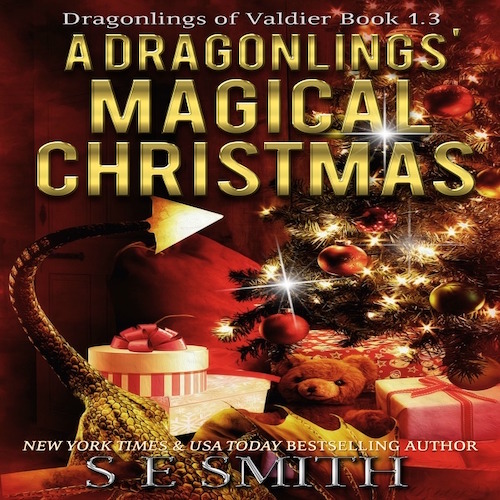 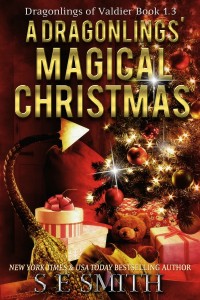 Are you ready to celebrate Christmas in July?

July 14th sees the release of A Dragonlings’ Magical Christmas, book 3 in the Dragonlings’ of Valdier series.

For those new to the Dragon Lords of Valdier, the Curizans and the Sarafins, here is some background for you. The Valdier are dragon shifters who have a golden symbiot, yes, symbiot, just the way I want them to be called as they are characters in themselves. The Valdier consist of three parts: the dragon, the man/woman, and their symbiot companion. They are friends with the Curizan (a species able to harness the energy around them) and the Sarafin Warriors (a cat shifting species).

Not only will we be meeting the Dragolings but also their moms and dad, grandmas and pops. Here is a recap of who’s who in the adult world in A Dragonlings’ Magical Christmas:

Here’s a teaser from A Dragonlings’ Magical Christmas, out July 14th:

“Then, Santa turned and asked Rudolph, the red-nosed dragon, if he would led his sled tonight,” Tina said with a grin as Cara came out onto the stage with the bright red glowing nose on again.”
“Red,” Alice clapped and squealed. “I like red.”
Laughter burst from the crowd as the children shrieked with delight when Cara made the nose shine really, really bright as she pranced around in her dragon form. She turned toward the other dragons, Trisha, Ariel, Abby, and Carmen and shook her tail at them before winking at the kids again. Riley stood next to Cara dressed as the Abominable Snow Monster, complete with pink high heels and a matching glittering pink jacket. She waved and blew kisses to the kids.
“Momma pretty,” Roam growled, clapping his hands.
“That’s right, baby,” Riley replied with a grin. “Daddy isn’t touching this jacket.”
“Damn… Darn it, Riley,” Vox snapped above the laughter. “Aren’t you ever going to let me live that down? You’ve got a damn closet full of the hideous things now.”
“Damn, damn, damn, damn,” Roam started chanting. Soon, the other children started chanting it as well.
“Damn it, Vox,” Riley snapped with a glare. “I told you we needed to watch our language!”
Vox grimaced and bent forward to scoop Roam up on his lap. Almost immediately, his son shifted into a squirming ball of hissing fur. Holding him against his chest, he whispered in the cub’s ear before setting him back down on the ground in front of him.
“Sorry, momma,” Roam said after he shifted.
“That’s okay, sweetheart, just don’t say it again,” Riley smiled with a little wave before she flicked a wayward strand of curly blonde hair that had escaped from her furry hat. “Sorry, Tina, go on.”
Tina rolled her eyes and turned back to the crowd. “Rudolph saved the day and all the other reindeer… I mean dragons… wanted to be his… her… friend after that. The End.”