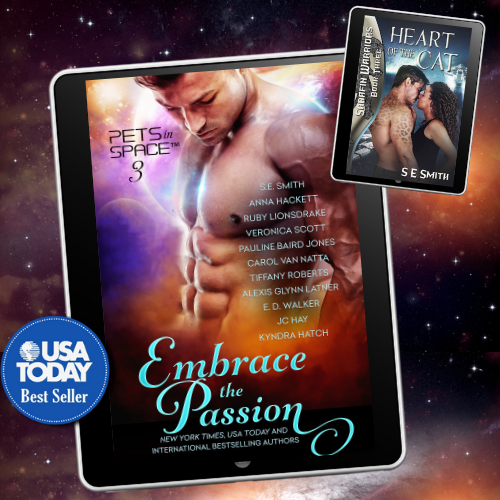 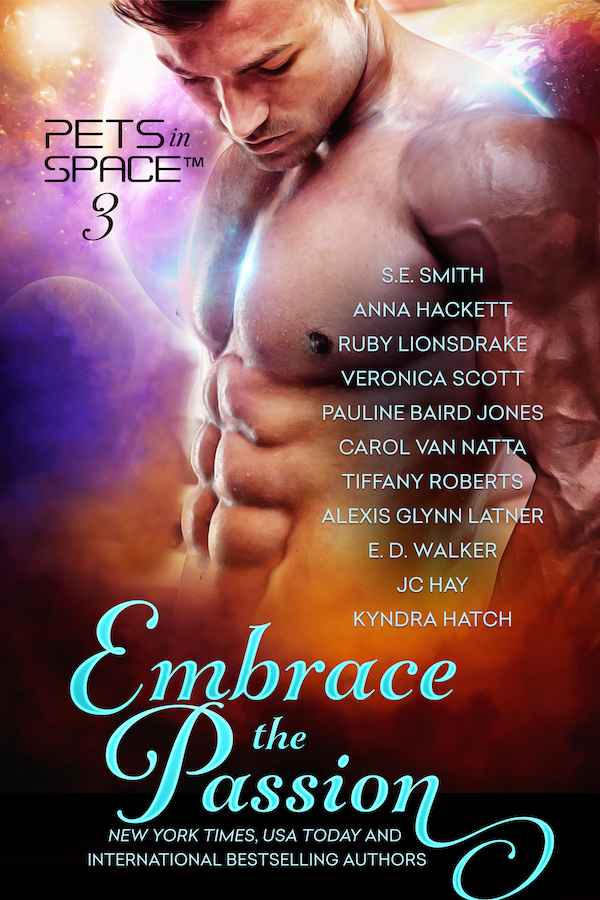 Embrace the Passion: Pets in Space 3

Embrace the Passion: Pets in Space 3

The pets are back in this new, exciting collection of eleven original stories from today’s hottest Science Fiction Romance authors! Feel the action and romance!HEART OF THE CATSarafin Warriors SeriesBy S.E. SmithCan love bridge the gap between a wounded alien warrior and the reclusive human woman who holds the future of his species inside her?DESERT HUNTERGalactic Gladiators SeriesBy Anna HackettAmong the desert sands of an alien world, a man with secrets to hide finds himself face to face with the one woman who can bring him to his knees.QUASHIMandrake Company SeriesBy Ruby LionsdrakeAlien fur balls, a handsome doctor, and a little white lie create havoc for a young woman who only wanted a job.STAR CRUISE: MYSTERY DANCERThe Sectors SF Romance SeriesBy Veronica ScottA long-lost princess and her three-eyed cat seek refuge on the Nebula Zephyr only to catch the attention of an inquisitive Security Officer.OPERATION ARKProject Enterprise SeriesBy Pauline Baird JonesA not quite routine mission to return rescued prisoners to their home worlds turns deadly for unlikely allies, a USMC Sergeant and a raised-by-robots pirate. Is the Sergeant’s unusual pet the wild card that will save or doom them?CATS OF WARA Central Galactic Concordance Novellaby Carol Van NattaA disgraced military Sub-Captain, a repair technician with secrets, and two special cats must save the day when trouble erupts at an important factory.HUNTER OF THE TIDEThe Kraken #3By Tiffany RobertsNearly broke by betrayal, a human discovers solace—and a chance for love—among the creatures he once hunted, but he must overcome prejudice and inhibition to claim the female he desires.STARWAYBy Alexis Glynn LatnerA lonely interstellar pilot and a passenger’s mistreated consort find each other in an interstellar hotel that offers everything to satisfy its guests’ desires—even desires they didn’t know they had.THE BAJO CATS OF ANTEROS XIIBy E D WalkerTwo ex-lovers, stranded in space, have to save a pair of kittens with hazardous powers before the local drug cartel catches up to them.SHADOW OF THE PASTBy JC HayOn a world of perpetual night, an aging ranger and a widowed veterinarian need to put aside their past to protect a pack of wolves… and their future.AFTER THE FALLBy Kyndra HatchThe Invaders took everything worth living for. Could an Invader show him how to live again?

Teaser from Heart of the Cat, my story in Embrace the Passion: Pets in Space 3:“What… kind of tea do you like?” she mumbled, reaching for the Taser and stepping back a little.She didn’t miss the way he stiffened—or the way he forced his body to relax. She watched as he placed both hands flat on the bar before he slid onto one of the bar seats. The click of the electric kettle sounded loud in the quiet room.“I’ll let you choose. I’m not familiar with the plants on this world, though Riley said something about eating certain mushroom or a five-leaf plant called marijuana might help me chill out. I am still trying to understand how a fungus or a leaf plant can cause my body to become cold,” he stated with a perplexed expression.She released a stifled giggle that sounded more like a snort. She shook her head at him and reached for some peppermint green tea. The amusement grew when he leaned forward to curiously watch what she was doing. She carefully placed the hot mug on the bar before she stepped back and picked up her own mug.“Well, you’ll have to settle for something a little less… calming,” she informed him before she studied his face. “You have spots.”