One question authors are asked is how they come up with their characters names. In my science fiction romance, many of the names are symbolic representations of the characters themselves. Without “inside information,” readers probably won’t realize the significance of the names, but it helps me to define the characters. 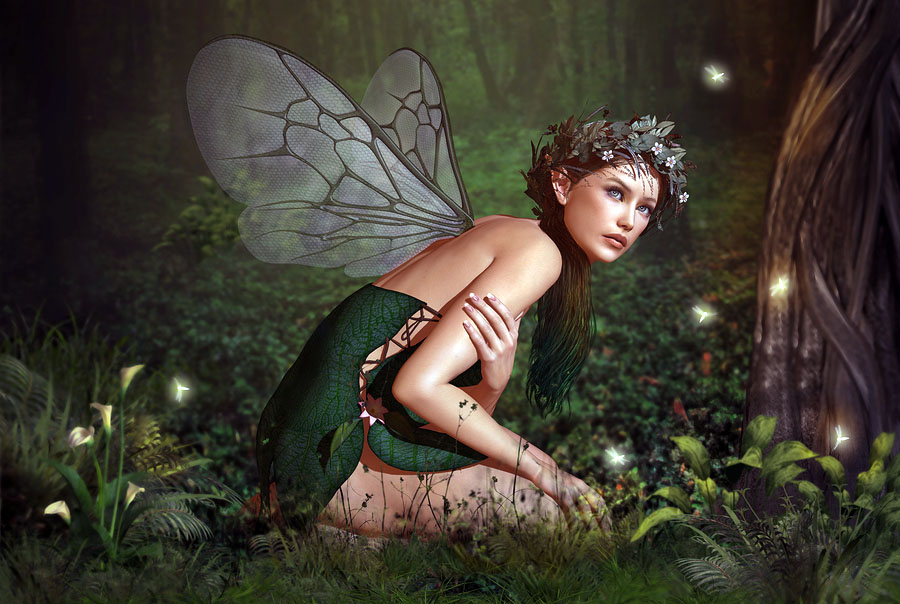 an illustration of a nymph who lives in the forest

In Rescued by the Cyborg, my story in Embrace the Romance: Pets in Space 2, heroine Solia is a Faria. Faria are fairy-like aliens who radiate light. You could say they have an “inner glow.” In the Cy-Ops Sci-fi Romance series, I first mention Faria in book 2, Mated with the Cyborg, then created a Faria heroine in book 3, Captured by the Cyborg. Her name was Illumina for illumination meaning light. When I decided to create another Faria heroine for Rescued by the Cyborg, I needed another “light” name. Latin roots offer wonderful alien sounding names. I asked myself what kinds of things produce light. The sun radiates light! Sun in Latin is solis. I needed it to be feminine sounding, so my character became Solia.

Most of my cyborg names in the Cy-Ops Sci-fi Romance series are symbolic as well. Cyborgs are machine/computer-augmented humans. To emphasize their humanity and show they’re not robots, I gave them all “man” names. The hero in Rescued by the Cyborg is Guy Roarke (Other cyborgs in the series: Mann, Homme, Andros, Sonny, Fellows). The only cyborg who doesn’t have a man name is Cyber Operations Director Carter Aymes because when the series started, he wasn’t a cyborg, and I’m such a pantser, I didn’t know he was going to become one.

Mittzi, the kitten in Rescued, has four white mittens (paws).

The villains of Rescued by the Cyborg are called Ka-Tȇ (pronounced Kah TAY) and live on the planet Katnia. Because they resemble hairless panthers, they are named after cats—but as I point out in the story, they are not genetically related to felines.

Rescued by the Cyborg

A Novella in the Cy-Ops Sci-fi Romance Series

Hostage and sole survivor Solia waits for death at the hands of vicious predatory aliens when Cy-Ops agent Guy Roarke disobeys orders and charges in. A former medic, he initiates emergency medical procedures before rushing her to Cybermed.

Guy is taken with Solia, but the guilt of a past mistake won’t allow him to plan for a future with the delicate, brave beauty. Life is so uncertain, he can’t even keep Mittzi, the kitten his niece gave him. What he can do is see to it Solia gets the help she needs for a full recovery. But when best intentions place her in greater danger, it’s up to a little kitten to make everything all right again.

Rescued by the Cyborg Excerpt

In this scene, the hero discovers the villains have captured a Faria.

“Scan the surface for life-forms alien to Katnia,” Guy ordered. “Report any anomalies.”

For several minutes the only sound in the cockpit was Mittzi purring, and then the computer spoke. “The exospheric molecular analysis has been completed.”

“Plasma diffusion with a molecular array consistent with a class B attack cruiser has been detected.”

Guy accessed his databanks in the microprocessor embedded between the hemispheres of his brain and pulled up a list of individuals and organizations known to run class B attack cruisers. It was a short list.

“Identical plasmic trace elements were detected in the troposphere and at ground level,” the ship’s AI said.

“You’re saying a craft landed on the planet’s surface?”

“Adjusting for weather and atmospheric conditions, the range would be between two and three weeks. The surface scan for alien life has been completed.”

“One alien life-form has been identified.”

He clenched a fist. “What?”

Embrace the Romance: Pets in Space 2

The pets are back! Embrace the Romance: Pets in Space 2, featuring twelve of today’s leading Science Fiction Romance authors brings you a dozen original stories written just for you! Join in the fun, from the Dragon Lords of Valdier to a trip aboard award-winning author, Veronica Scott’s Nebula Zephyr to journeying back to Luda where Grim is King, for stories that will take you out of this world! Join New York Times, USA TODAY, and Award-winning authors S.E. Smith, M.K. Eidem, Susan Grant, Michelle Howard, Cara Bristol, Veronica Scott, Pauline Baird Jones, Laurie A. Green, Sabine Priestley, Jessica E. Subject, Carol Van Natta, and Alexis Glynn Latner as they share stories and help out Hero-Dogs.org, a charity that supports our veterans!

10% of the first month’s profits go to Hero-Dogs.org. Hero Dogs raises and trains service dogs and places them free of charge with US Veterans to improve quality of life and restore independence. http://www.petsinspaceantho.com