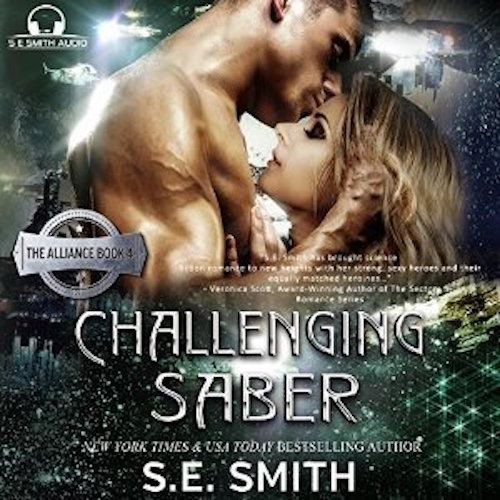 A damaged alien warrior fights to save the human woman he loves when she is caught behind enemy lines during a civil war.

Seven Years Before – Earth:“I swear, Hunter, if that she-creature bites, hits, or tries to escape one more time, I’m going to put her in a cage!” Saber growled, staring at the petite female standing behind his friend. “Why you little…!”“Saber,” Hunter grimaced, looking at his friend’s murderous face. “She is a defenseless female.”Saber could see what Hunter couldn’t. His hands curled into tight fists at the self- satisfied smirk on the young human’s face. He didn’t care that she was under Hunter’s protection. Saber was about to throw her over his shoulder and scare a little respect into her.He rubbed his wrist. He was sure she had drawn blood this time. He wondered if the healer had checked her for any diseases.“I swear, Hunter,” Saber started to say before clamping his lips shut. “Go, check on the other females. I will watch over her,” he finally said with a tired sigh.“Are you sure? I could see if another warrior…,” Hunter offered before giving Saber a strange look when a low snarl escaped his friend.“Did he just snarl?” The young female asked in awe. “What are you guys? That sounded just like a cat. I heard one do something similar at the zoo. Does he need to be caged or something? He isn’t going feral, is he? Ugh! I bit him. You don’t think he has rabies, do you? Maybe he should be quarantined. My neighbor did that to a feral cat that she found in the woods near our house. Do you guys have those big pet containers?”“Taylor,” Hunter warned, glancing at Saber’s red face. “Saber is fine. He is under control. Isn’t that right, Saber?”“Oh, I am under complete control,” Saber said with a tight, sharp-tooth smile. “Just leave the little human to me.”“Thank you,” Hunter said with a relieved smile. “I won’t be long. I hope that the healer will allow me to bring both of her siblings back to my rooms.”“Take your time, we will be fine, won’t we, Taylor?” Saber promised.He stared over Hunter’s shoulder. His intense eyes locked with Taylor’s wary ones that gazed back at him with growing alarm. He rolled his shoulders and bent his neck from side to side, enjoying the feeling of the crack that released the tension that was building inside him.“Keep her safe, Saber,” Hunter finally said, breaking the growing silence. “Her sister is my Amate. That means that Taylor, and Jordan, are now under my protection.”“I know what it means, Hunter,” Saber growled, not taking his eyes off of Taylor. “I promise, there won’t be a single bruise on her.”Hunter nodded, glancing once more at Taylor before reluctantly stepping around the table in the nearly deserted cafeteria. Saber had to give Taylor credit, she didn’t scream until Hunter walked out of the room. Still, he should have known it wouldn’t be easy to catch her.She was fast, slippery, and…, he thought as he wiped the white gooey food matter from his face, creative when it came to escaping.“I am so looking forward to wrapping my hands around her little neck,” he muttered under his breath as several warriors watched from the corner of the room. “Taylor,get down from there right now!” He ordered, looking at the top of the line of cabinets attached to the far wall.“Why don’t you try to make me, you moron?” She snapped. “I’ve got a bowl of…,” she glanced at the orange mixture with a frown. “Orange goop and I’m not afraid to use it.”Saber flicked a piece of green food particle off his left shoulder. Right now, he was wearing just about every other color of food matter the cafeteria served. Why not add the last? He was going to need to visit the human version of a cleaning unit as it was.