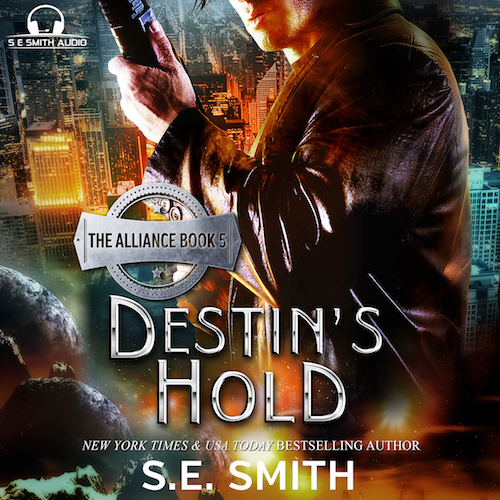 An alien ambassador discovers that not everything is as it seems when she meets the human male overseeing the rebuilding of an Earth city.

Destin Parks will do whatever it takes to rebuild the city he calls home, even if it means working with the new alien ambassador sent to oversee the project. His encounter with her predecessor left him hesitant to trust the alien diplomats assigned to Chicago’s rebuilding. The problem is – if he doesn’t work with them, they will try to replace him and that is not going to happen without a fight.

Jersula Ikera was assigned to Earth by the Alliance Council. The Council hopes her cool logic and calm demeanor will resolve the upheaval caused by the last ambassador. Jersula has fought hard for her position, and while not pleased with her current assignment as a liaison to the humans, she will do her best to help rebuild the world its inhabitants have destroyed. What she does not anticipate is her reaction to the hardheaded male that she has been assigned to. His ability to get under her skin and ignite a flame inside her leaves her confused and mystified.

Danger undermines Jersula’s efforts when she uncovers another alien cartel’s plans to traffic human women and children. A near fatal attack leaves her trusting no one except the one man who has sworn to protect them. Together, Destin and Jersula race to stop the traffickers before the women and children are taken off-planet. What they don’t realize is that the traffickers are not the only ones they are fighting against; the Waxian and Drethulan forces have targeted Earth.

Can Destin and Jersula stop the traffickers and prevent the deadly forces of the Waxians and Drethulans from destroying the progress they have made? Will the Alliance be able to protect Destin when the enemy discovers his connection to a powerful Alliance family? The battle for Earth has just turned personal.

“Ajaska warned us that your life would be in danger and that it was of paramount importance that nothing happens to you. Razor assigned me to protect you.”

Destin frowned and stared at Trig in disbelief. His life was in danger. Hell, when had it not been? Kali and he grew up on the streets, running them from the time they could walk until well after the Trivators announced their arrival and the Earth had dissolved into a fiery pit of hell and destruction. Now, the Trivators thought he needed a damn babysitter? Shaking his head, he crossed his arms and glared back at Trig.

“I hate to tell you this, but you are about twenty-four years too late on the babysitting job,” he replied sarcastically. “I’ll give my mom credit for the first two years of my life.”

“Razor thought this was different,” Trig replied with a shrug.

“Who am I supposed to be in danger from and what exactly did Ajaska say to make Razor think I might be in danger?” Destin asked with a skeptical expression.

“We don’t know,” Trig admitted, reaching up and running his hands through his hair in aggravation. “The damn Kassisan was pretty tight-lipped. The only thing he would say was that you were in danger and we needed to keep you alive for the future sake of your planet.”

“For the future sake….” Destin shook his head.

“Yeah, well, we’ve been trying to anticipate how this or that factor might affect an outcome we don’t even know the details of. All we know is you’ve got to live through what’s coming,” Trig said with a frustrated sigh.

Destin released a dry, rough chortle, and dropped his arms to his side. “News flash… My life was already in danger. I killed the man who was trying to kill me, and Chicago is being rebuilt. Ajaska missed the memo or forgot to send it out before reality hit. Plus, I already have a team in place to watch my back. I trust them – as much as I can trust anyone. I like you, Trig. I think you are a good man, but I’ve learned that even those you know aren’t always what they appear to be. Go find someone else to piss off – that means to irritate in case you didn’t know. I’ve got enough going on without tripping over your ass all the time.”