Cyborgs: from the Six Million Dollar Man to Cyberoperative

If you’ve noticed similarities between cyborgs in today’s science fiction/sci-fi romance and the Six Million Dollar Man, a TV show from the 1970s, you’re on the mark. The “bionic man” was a cyborg. Col. Steven Austin, played by actor Lee Majors, was an astronaut who was critically injured when his ship crashed. Two legs, one arm and an eye were replaced with bionic parts making him faster and stronger. You can see the opening credit/sequence from the show here.

The Six Million Dollar Man was based on the Martin Caidin novel, Cyborg. The show had a successful run from 1974-1978 and led to a spinoff, The Bionic Woman (1976-1978), with Jaime Sommers played by Lindsay Wagner. Like Austin, Sommers had two legs and one arm replaced, but she had bionic ear instead of an eye.

What is different about Austin and Sommers from the cyborgs in the Cy-Ops Sci-fi Romance series and other authors’ cyborg romances, is that the bionic man/woman didn’t have any computer interfaces. In its infancy, computer technology was practically nonexistent in the 1970s. Computers were huge mainframe things (although the first PCs came out in the mid 1970s). The era was pre-internet, pre-wireless. So Austin and Sommers had mechanical limbs, but no computer chips or processors, no nanocytes.

Fictional cyborgs today aren’t just physically stronger, they have greater mental capabilities. The cyborgs in my series can communicate with each other telepathically via wireless, can hack into most computer systems, and have a database of information in their heads they can access. Their nanos, tiny robotic cells in their bloodstream, enhance bodily functions and repair injuries.

The computer age has changed cyborgs.

The Six Million Dollar Man and The Bionic Woman were action-adventure stories. The Cy-Ops Sci-fi Romance series books are romances, focusing on the developing love relationship between the heroine and the cyborg hero who works for a secret military organization called Cyber Operations (Cy-Ops). 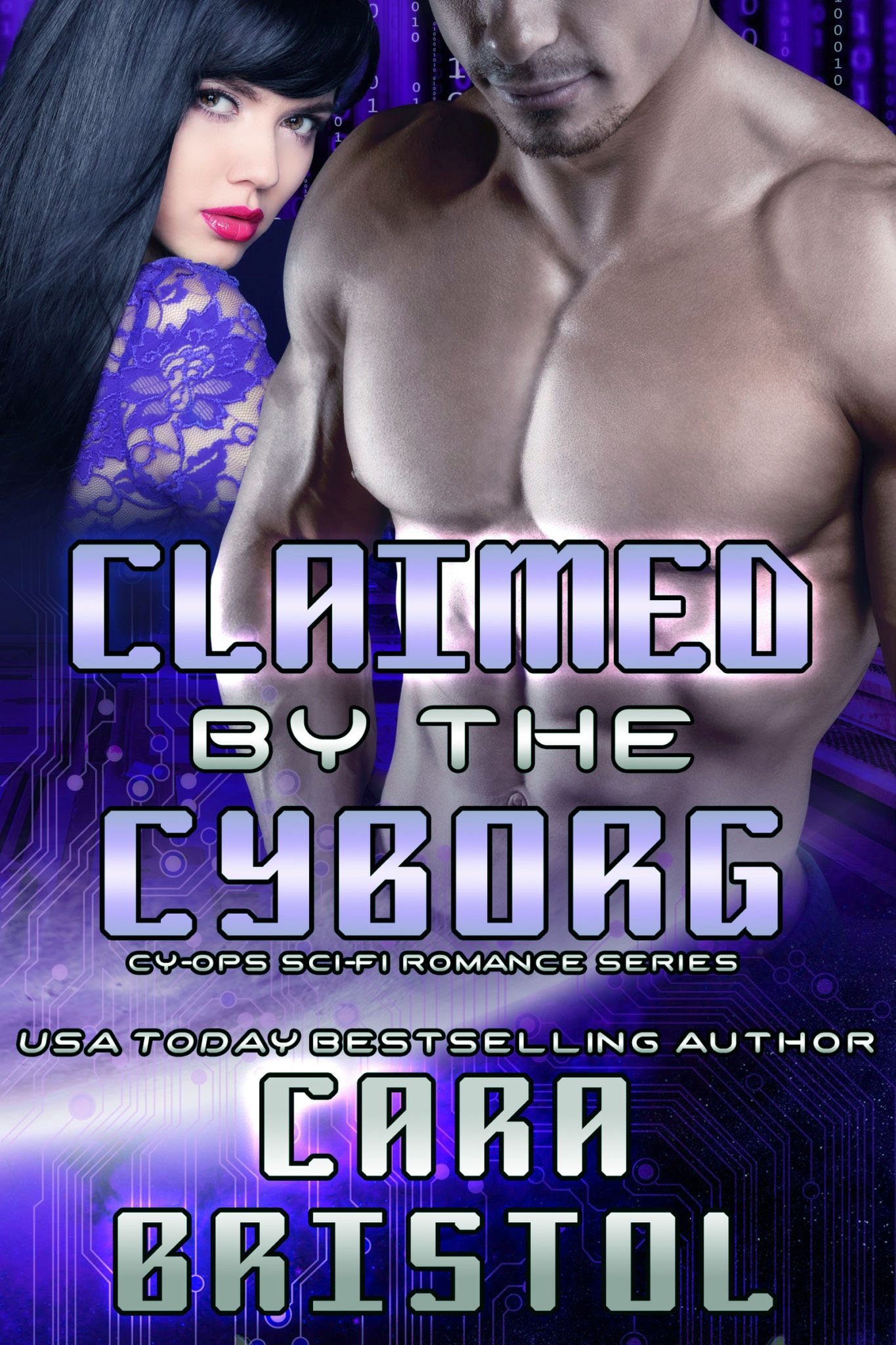 Claimed by the Cyborg Description

March Fellows assumed he had all the time in the galaxy to pursue a relationship with Jules, an alien exchange student from Xenia, until she vanished without a trace. After years of searching, he finds his lost love on the eve of her arranged marriage.

The daughter of the Xenian emperor, Julietta never meant to fall in love with a Terran man while visiting Earth. Leaving to fulfill her responsibilities on her home planet opened up a hole in her heart that could never be filled. When March, now a cyborg, unexpectedly shows up just before she is to be bonded, she struggles to find the courage to turn him away a second time and follow through with her duty. Before she can act, the lovers are thrust into a political conspiracy that threatens the Xenian empire and their lives.

An excerpt from Claimed by the Cyborg

(In this scene, hero March arrives on Xenia to look for Jules. He’s escorted by two guards to the emperor’s palace).

“Is there a festival going on?” he asked.

“No, we are preparing for the imperial bonding ceremony—the day after tomorrow.”

“I didn’t realize the wedding, uh, bonding ceremony, was so soon.”

The guard nodded. “It follows the Sha’A’la.”

“The bride fight.” March nodded. A woman’s mate proved his worthiness by battling a challenger. The Sha’A’la harkened to the days when warring tribes stole brides from rival clans, although it was purely ceremonial now, part spectator sport, part theater.

The guard arched her eyebrows. “You’re familiar with the custom?”

“I’ve heard a bit about it.” Jules had mentioned it in passing, and the database in the microprocessor embedded between the two hemispheres of his brain filled in the details she’d omitted. “My understanding is marriages are arranged, so it’s predetermined who’s going to win?”

“Correct.” The guard grinned. “But, we like to pretend it could go otherwise.”

“I see,” he lied. There was no such thing as a mock fight in Cyber Operations. When he had fought, his opponents had died. No pretense. His cyborg brain had recorded every death. The enemies he’d disposed of didn’t bother him, but the innocents he’d been unable to save did. When the atrocities he’d witnessed had gotten too much to take, he’d resigned from Cy-Ops and gone to work for Moonbeam before he burned out. A university professor, he’d never planned to become a cyberoperative. No one did. They all came to Cy-Ops the hard way—a tragedy, a visit from Carter then reconstructive cybernetic surgery.

“Is this your first visit?” the guard asked.

“Yes. But I met someone from here.” He paused. “Her name was Jules. Do you know her?”

“My sister’s name is Jules,” she said.

March swept his gaze over the woman’s face. Other than her piercing eyes, the irises solid black, there was no resemblance, but his heart hammered anyway, and he had to ask. “Did your sister study off planet—on Terra?”

Don’t miss the Claimed by the Cyborg Instagram Contest! Enter for a chance to win a $25 Amazon gift card. Click here for details. Contest runs January 10-20. The earlier you enter, the greater the chances to win. 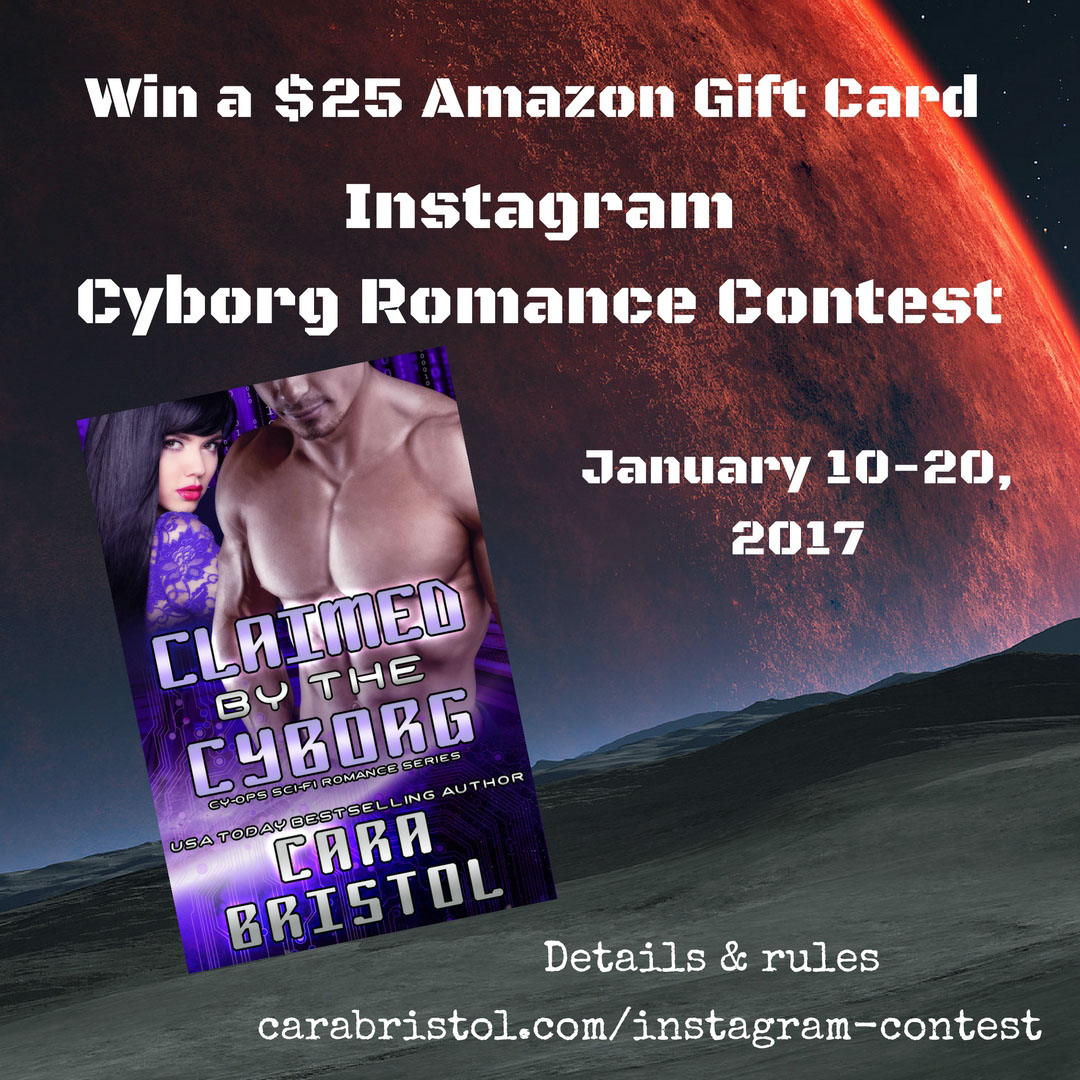