Hannah’s Warrior is out now in audiobook 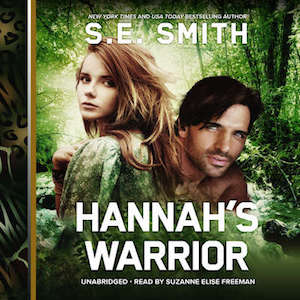 Hannah’s Warrior, Book 2 in Cosmos’ Gateway series, is out now in audiobook!

Blurb:
Hannah Bell, the oldest of the three Bell sisters, spends most of her time in the remotest parts of the world photographing endangered animals. She is also gifted with an extraordinary sixth sense which has saved her life on more than one occasion. When she senses something has happened to her littlest sister, Tink, she will do whatever it takes to protect her. What she doesn’t know is her sister’s best friend Cosmos’ new science experiment has opened a portal to another world. A world she is about to be taken to whether she wants to go or not. Borj ‘Tag Krell Manok is the calmest of his four brothers, or so he always thought. The second oldest, he has been assigned the task by his father and the council to bring the sister of his brother’s bond mate to their world. Borj knows deep down that Hannah is destined to be his bond mate, something he has hoped for since his first mating rite ceremony. What he doesn’t expect when he meets her is her resistance or her independence.

What Readers are saying about Hannah’s Warrior:

This is the second book in the Cosmos Gateway series. I found this book to be every bit as good as the first one.

I absolutely love this book and series, you’re gonna love reading it…

Oh my goodness, I just know that you will love reading about the people of this amazing world where the warriors are so devoted to the bond mates that make them complete!!!