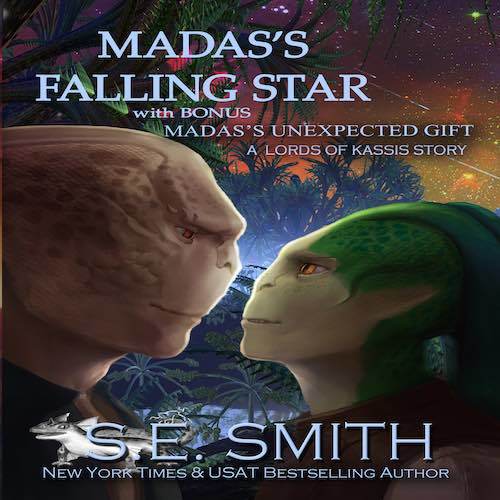 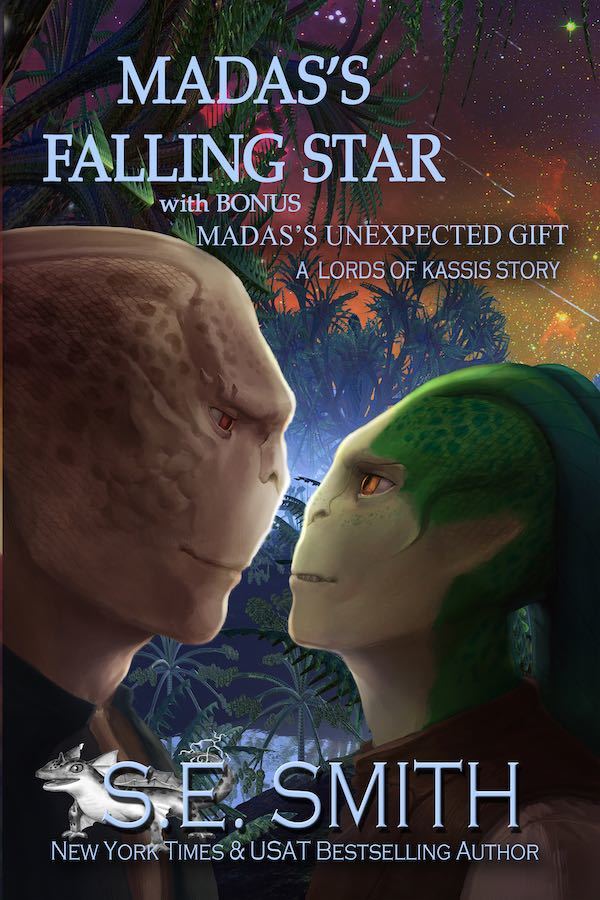 A Lords of Kassis Story

A book and a novella! An adventurous princess discovers a meteorite with an alien creature inside — and together they plan to steal the starship of a stranded warrior. All they have to do is lead him away. How hard could it be?

Prince Gril Tal Mod is destined to be the next Supreme Leader of the Tearnats,  if he survives long enough to ascend to the throne.

Gril was supposed to be on a routine training exercise, but his flight goes horribly wrong when engine trouble forces him to land his fighter in a remote mountainous region. Once stranded on the ground, Gril discovers the malfunction was no accident, and he isn’t alone. He can sense someone watching him from the shadows.

Princess Madas Tralang’s curiosity always seems to get her into trouble. When Madas spies an unusual object streaking across the sky before crashing near her location, she believes it is a good omen. After all, she found her pet, L’eon, the last time an object fell from the sky.  Her hopes of finding something valuable are dashed when instead she sees a big, and rather ugly, Tearnat warrior. Though there is something about him… something magnetic, it’s his spaceship that she really wants. It is just what she has been searching for, a means to escape the dreary life expected of her!

The giant warrior pilot of the spaceship isn’t going to give it up easily, however, and Madas soon finds herself locked in a battle of wits and skill with the strange warrior, but they are not the only players on the field. Danger surrounds Madas and Gril, both from Madas’s clan and from the saboteur who is determined to see Gril dead. Can the Prince of the Tearnats and a small, but deadly alien pet, defeat their foes and save Madas before time runs out, or will Gril’s growing love for a curious Princess doom them both?

Internationally acclaimed S.E. Smith presents a new action-packed story full of romance and adventure. Brimming with her signature humor, vivid scenes, and beloved characters, this book is sure to be another fan favorite!

The meteorite glowed, turning a molten red as it entered the atmosphere. Large outer pieces began to disintegrate from the heat. The small reptilian creature deep inside curled into a tight ball. Sorrow coursed through him. He sniffed and buried his head under his tail.

He had been in his second hibernation, hidden deep beneath the surface of his home world when it was destroyed. One moment he was peacefully slumbering and the next he was hurtling through space.

He had tucked his body into the narrow crevice he had carved out for his long sleep when the large section of rock was blasted into space. The force of the explosion had melted the iron embedded in the rock around him, sealing him inside. Now, the sheltering iron shell was slowly disintegrating around his small body.

The meteorite broke through the atmosphere of the planet, and he floated upward inside his small prison. It began twisting and turning in its downward trajectory. He grunted as he was flung around inside his prison. Seconds later, he heard the snap of trees breaking and he was tumbled over and over with dizzying and bone-jarring speed. His head felt like it was still spinning when his rock capsule came to an abrupt stop.