If you’ve hung around me for very long, then you know that I am one of the co-founders of the Pets in Space anthologies, along with author Veronica Scott.

When Veronica Scott and I conceived the idea for our Pets in Space anthologies, one of the first things we talked about was supporting a charity that benfited our military and first responders—those who run toward danger when others are running away. And we hoped for some kind of pet tie-in.

It was total serendipity when we found Hero Dogs. This will be our fourth year as proud supporters of Hero-Dogs.org. Pets in Space ® authors have donated over $7,100 in the past three years to help place specially trained dogs with veterans and first responders.

Why veterans and first responders?

My father was a veteran of both WWII and Korea. He was 18 years old when he was drafted into the Army and 21 when his national guard unit was sent to Korea.

At eighteen I was just starting college, not setting off to get shot at.

I sometimes forget how young they all were. How homesick, how seasick. How scared. When my dad left for Korea, he’d been married three months. His 18 month deployment meant he missed the birth of his first child. He didn’t know if he’d make it home. He didn’t know he’d live to find himself called one of the Greatest Generation. He just did his duty, then and throughout his life. He was my first hero.

I am so grateful to all the men and women of our military and to our first responders.

I am so grateful to Hero Dogs and other organizations that stand ready to help veterans and first responders recover from wounds received during their service. It is our privilege and honor to support Hero Dogs again this year. As in the past, 10% of all preorders and the first month’s royalties of Pets in Space 4 will once again be donated to Hero-Dogs.org.

We hoping to raise more this year, but we need your help to do it. Please join us in supporting this very worthy cause by buying a copy of Pets in Space 4 and in sharing information about Pets in Space 4 with friends and family, in your real life and on social media. I promise you that you won’t regret it. You and, everyone who buys a copy will get to read 13 amazing stories of romance, danger, and of course, the heroes and heroines’ loyal and brave pets. It’s almost 1500 pages of science fiction romance, adventure with pets.

And yes I am an organizer, but I’m also one of the author’s. My story in the anthology is called Cyborg’s Revenge and it is a related story in my Project Enterprise series. What’s it about you ask? 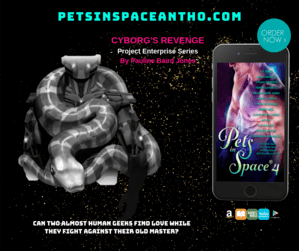 They say you can’t go home again, but what if it is the only way to truly be free?

Rap and Ale have a mission to neutralize the man who enslaved them and their crew. It’s dangerous, with a high probability they will fail, but it is the only way to be truly and completely free of their past—and free to find a future with each other.

Here’s a teaser from the story:

That was the problem with plans. No matter how carefully Rap planned, stuff happened. As a robot he’d been able to react swiftly to rapidly changing dynamics. This body was much slower, but he couldn’t have executed this plan in his previous unit. And the only reason this human body had a chance was because of its cyborg enhancements.
You are welcome.
The AI, Nelson had come with the enhancements. Or the enhancements came with the AI. There was no question Nelson was key to making them work properly. But having a voice inside his head was an acquired taste—one Rap was still acquiring.
Your plan is imperfect.
Nelson was correct—
I am always correct.
Rap didn’t dispute this. It felt too much like arguing with himself, even though he knew Nelson was a separate entity operating inside Rap’s head.
“It is all we have,” Rap pointed out, startled by the sound of his voice in the otherwise empty room. If not stopped, the Q’uy, and V’ruwak in particular, would move against them again, harder than the last time, and they’d barely survived that.

Can Rap and Ale defeat their enemy and find their own happy-ever-after? Only Rap’s chatty pet Snake knows for sure.

I hope you’ll join us this year for 13 amazing adventures in space! Pets in Space 4 will land on eReaders all over the galaxy on Oct 8, 2019! Okay, maybe not the whole galaxy, but you never know, right?

And I’d like to personally thank you for your support of the Pets in Space anthologies. When Veronica and I talked about the first one, we had no idea there would be four. And there wouldn’t be without you, our readers. Thank you so much for taking this adventure with us. You are the best!