One of the pleasures of doing an anthology is getting to meet new authors, even if only online. I meet Cassandra Chandler through the Pets in Space® 4 anthology and she immediately impressed me with her enthusiasm that just beams out of her. I asked Cassandra to share with me a little about her pet in Pets in Space® 4 so over to Cassandra…. 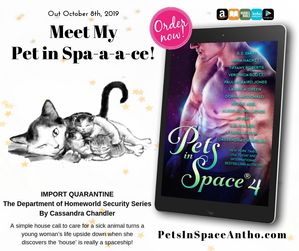 One of the best aspects of being a writer is when the story, the characters, or the world surprise you. The Department of Homeworld Security has been no exception. I think the most delightful surprise so far has been the cats.

It started in Export Duty, when I discovered that Ari has been watching Earth cat videos and desperately wants one as a pet. I had no intention to make that part of his character, but it came up so naturally in his conversation with Rin that I knew I had to keep it. Now, I can’t envision Ari without a cat in his arms. It’s a different cat every time, and I’m hoping to make this a running gag in the series going forward. Lucky for Ari (and me), the newest human members of the Department of Homeworld Security have a pretty large clowder of rescue cats for him to hang out with.

The Vegan xenobiologist, Cyan, is also smitten with cats, but she can go one step farther than Ari—she can talk to them. That was another surprise I discovered while writing the series, and one that I’ve been exploring quite a bit in my mind. Beyond the desire for food, shelter, affection, and entertainment, what would a cat want? And what would a technologically advanced lizard person and a cat even have to talk about?

Turns out, quite a bit. 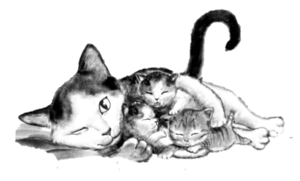 Cyan talking to the cats started out as a fun quirk, but has now fed into one of the pivotal aspects of world building for this series. It’s informed not just the direction the story is heading, but also where it’s coming from. I’ll be unveiling this as the series goes on, but there is a particular family of cats that will be figuring prominently in this all—starting with Marq’s pet, Meredith.

I’ve hinted in the series that something bad happened on Vega that drove the Vegans from their homeworld, but not what. After listening to Cyan talk to Freddie (the marmalade tabby from Export Duty) in my head, and now Meredith, from my Pets in Space® piece… wow, I’ve learned a lot about this universe. And I’ve never been more excited to see where the stories are about to go and how Meredith’s very special kittens figure into the shenanigans (because there will be shenanigans). I hope you’ll come along for the ride!

Grab your copy of Pets in Space® 4 today! For a limited time, Pets in Space® 4 brings together today’s leading Science Fiction Romance authors to help Hero-Dogs.org, a non-profit charity that helps our service veterans and first responders. https://petsinspaceantho.com

Excerpt from IMPORT QUARANTINE in Pets in Space® 4 anthology:

She grabbed her phone from her bedside table and ran to the door, stepping up on her tiptoes so she could see through the eyehole. The motion sensor light had tripped, and through the fish-eye lens, he looked…

He had greenish-blue eyes, sandy brown hair—shorter on the sides than on the top—and a strong jaw and nose. Nice lips. Really nice lips. His arms were braced on either side of the doorframe and his shoulders were broad enough that he looked totally capable of knocking down her door.

“Wow, he is buff,” Caitlin whispered.

He lifted his fist and hammered on the door again, hard enough to make the pictures on the walls shake. She yelped and jerked back.

His tone hadn’t lost any of its urgency when he said, “I need your help.”

She was about to look through the eyehole again when he said, “Brigid told me you were.”

Brigid, the quieter twin who somehow lived the more interesting life. Brigid, surrounded by celebrities that hired her to cook for them. Brigid, the valedictorian, who could do no wrong in their parents’ eyes.

“An animal doctor.” Caitlin raised her voice so he could hear her clearly.

“That’s what I need. Please, my cat needs help.”