I’d like to welcome all you critters and critter lovers to Pets Are People, Too.
I’m Clawdia Kitty.
And I’m Nose-4-News Hound. 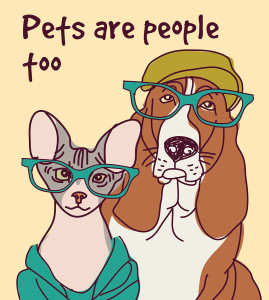 As you know, we like to dish out the secrets on our human pets, because, hello, they are sharing us everywhere and with everyone!
And we have some pets with SECRETS to share, Clawdia.
I have to say, we’ve had pets on YouTube, pets on skates, pets on the wall of shame, pets on Twitter, pets on Facebook, Instagram and Tumblr, grumpy pets, happy pets, slightly dysfunctional pets—we’ve have even had pets who have pets, but we have never had pets from space!
[Long howl from News] Let’s bring it, then, Clawdia.
First up, we have K-Nine, coming to us from A Mate For Matrix. K-Nine, can you tell us a little bit about this human author, known as S.E. Smith? 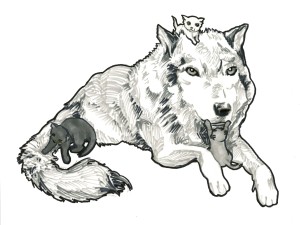 K-Nine knows the inside scoop on S.E. Smith’s fascination with squirrels. It is so bad, that she often sits in the car for an hour or more just watching them. It is like she is addicted to knowing what they are doing! She takes pictures of them, talks to them, and has even been known to offer them tidbits of mulberries, bananas, and pineapples from the garden. Of course, only the ones they have already been eating on. K-Nine has even caught S.E. Smith singing the Gray Squirrel song. “Gray Squirrel, gray squirrel, bush your bushy tail. Hold a nut between your toes, wrinkle up your little nose. Gray squirrel, gray squirrel, bush your bushy tail.” Man, she loves that song! Personally, I think she is totally nutty.

Ms. Kitty loves squirrels, too. I think S.E. and I would get along, girlfriend.
Next we have Bang Bang, who is just panting to tell us about Susan Grant… 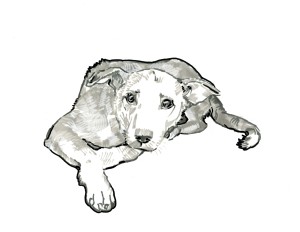 Bang-Bang here. I’ve battled monsters on remote planets, raided with the Interplanetary Marines, and witnessed emergency drills onboard Bezos Station, but never have I seen the kind of action that explodes at the Grant household each day at dinnertime. See, Susan Grant is “lost in space” in front of her computer, writing, until  precisely 5:07 pm when my little friend Skye begins her dinner vigil next to her human’s desk. “Oh, geez, look at the time. Skye, you want dinner? You want dinner?” Susan Grant asks (silly question if you ask me, as dumb as “Who’s a good boy?”). Susan Grant races to the fridge, stirs a scoop of canned dog food with Skye’s kibble, feeds her, then runs back to the fridge and grabs random ingredients that no sane human would dream of combining. Then she and Skye dash out to the garden to find more edibles to add to the crazy mix. When Mr. Susan Grant asks what’s for dinner, she laughs and replies, “A magic mix, never to be repeated.” “I love your magic mixes,” he says truthfully, and considers her the “MacGyver of cooking”. After watching all this, I’m ready for a nap–after crumb patrol, that is…

If I wasn’t a kitty, I’d be in love with the oh-so-cute, Sparky, who is ready to dish some stuff about Cara Bristol… 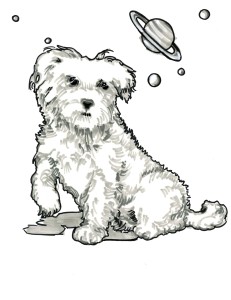 I was shocked when I found out not all humans can dance. Though it’s not mentioned in Spark of Attraction, my owner Miranda Lowell is a naturally gifted dancer and loves the Xenian Whirl, the Arcanian Scramble, and the Solar Breeze. Author Cara Bristol? The woman has two left feet and no rhythm. She and her husband took something called “Ballroom dancing,” lessons – still don’t know a step. Then they enrolled in a beginning “Swing” class. When the other students advanced to intermediate—they had to repeat beginning again. And still can’t dance. Worse, Cara Bristol almost crippled a man once. She was “dancing” in a nightclub, and accidentally stomped on his foot with her four-inch heels. The poor guy doubled over and hobbled off the dance floor. No one else asked to her dance that night.

This cute duo is, respectively Moby and Midorri, and what they don’t know about Veronica Scott, is not worth knowing…. 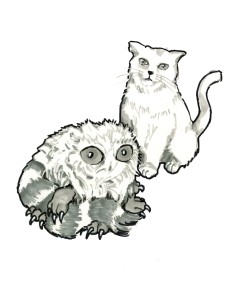 Veronica likes to belt out show tunes, country music and old rock n roll songs at the top of her lungs. She might even dance, which confuses us pets and we take refuge under the chair until the concert is over. Last night it was “Meet Me in St. Louis”, “The Trolley Song” and various really old Beatles tunes, plus a bit of Shania Twain.

Miss Kitty would like visiting that house. She loves meeting hip cats in St. Louis…

Pets bravely go where no-one has gone before! Pets spill the beans on their authors in #PetsInSpace

And from down under—the solar system—we have Peddrenth, the bearded dragon. I can’t even imagine what you could tell us about Pauline Baird Jones…. 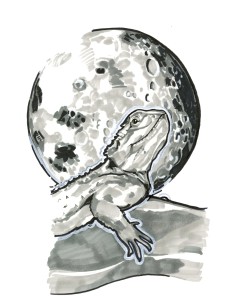 My experience with humans is somewhat limited, but really, I have two complaints. She does not like the heat. Right there we are incompatible. I live to be warm. My species comes from Australia! And just try to find a good, big, live bug to eat in her house. If you like chocolate, you’re golden. You can’t turn over a piece of paper without finding chocolate, but trust me. There are no bugs in her house. Her chilly house. Her really chilly house.

I feel your pain, dragon. We cats like to be warm, too. But here’s a guest for you, Nose-4-News… And from far far away, so far, they can’t hear me howl, we’ve got StarDog, Katrina, who looks like she’s more than a dog—and well equipped to spill the goods on Laurie A. Green… 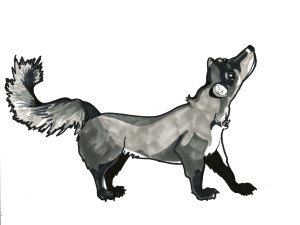 Ohhhh, yes, yes! I know many sekrits. My author? She’s forced to write. No kidding! I’m a StarDog, I don’t lie about such things. There’s this big, menacing dude in her office that always has his blaster trained on her to keep her motivated. What, you want proof? *digs around in sekrit photo stash* You’ve got it. 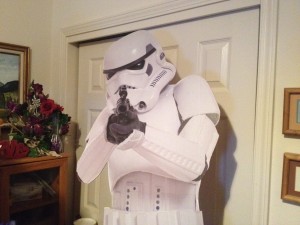 Ooh, this little bundle of energy — literally — is buzzing to spill the beans on Alexis Glynn Latner… 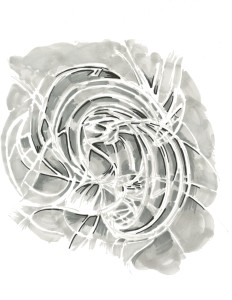 The question is meaningless to me, because I consist of energy.  I am very interested in electricity and electrical circuits.  I am indifferent to what you protoplasmic beings do with your bodies. I do know what secrets are – something surprising that is unknown to others.  I have secrets of my own.  As to Alexis’ secrets, I can tell you this: for a generally orderly being, who has her physical belongings and computer files alike neatly organized, it is most surprising what a mess of power cords exists in her office behind her desk.  A nest of electric eels would be more orderly than that.

Miss Kitty believes the only purpose for cords is for her to play with… Woof, woof, introduce our next guest, Miss Kitty… Oh fine…oh, you are fine, Ranger, you rangy beast, you, do tell us about Lea Kirk… 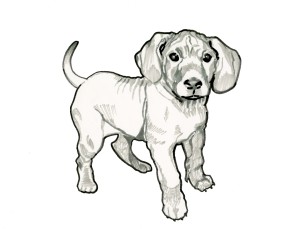 [thumping her tail and batting her eyes at Nose] I have three humans to deal with. My book humans, Simone and Graig, and my author human, Lea Kirk. All of them have juicy secrets, but since we’re only focusing on our author humans I will tell you about Lea. As a teenager, the first romances Lea discovered were by Bertrice Small, and she used to sneak them home in her school book bag. Believe me, if her mother only knew, I might not be here today.

Mother knows best, and what mama doesn’t know…. [a howl from Nose-4-News] What, oh, our last guest is a fox. Try to control yourself, Nose-4-News. Ember maybe be a little fox, but she’s also our guest! And she is dying to tell us all about Carysa Locke…. 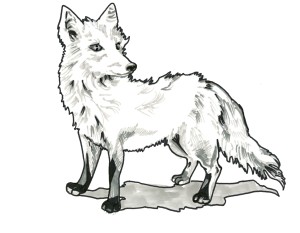 Of course I know secrets! I am kith. I know the most secret thoughts of all the humans around me…not that they are usually all that interesting. Truly, humans worry about the strangest things. But those fortunate enough to be bonded to kith benefit from our help. Without us, I’m sure they would all have died in the early days of the colony. Oh, but you asked about secrets. Well, it’s an open secret that the one who calls herself Carysa Locke is actually a team of two – one writer, and the one who originally made our universe. I know everything about both of them. They both rely far too much on a drink called coffee – a stimulant. Though the writer claims she just loves the taste and warmth of a cup every morning, I believe she is more reliant on it than she realizes. She has a gleaming silver contraption that makes all manner of strange noises while preparing her drink, a version of the substance called espresso. It is highly impractical. She cannot travel with the machine, so whenever she is forced away from home, she is much grumpier than usual waking up without her usual beverage. She says none of the shops which provide this espresso make it as well as she does. I worry that this obsession she has will interfere with the words she types into the machine, building our society and stories. If she had a kith, I’m sure this sort of dependence would never have happened. We kith are known to reliably wake our humans in the morning, with no need of shrill alarms or special cups of stimulant to get them moving.

I don’t know about you, Nose-4-News, but I think this might be my favorite interview yet. I’d like to thank the pets of Pets in Space for dishing out the secrets of the authors of Pets in Space, because wow, they sure had some. We still love them, though, because PETS! SPACE! [HOWLING that fades gradually away….]

#PetsInSpace spill the beans on their authors! Who would have known their deep dark secrets like this?! #SciFiRom 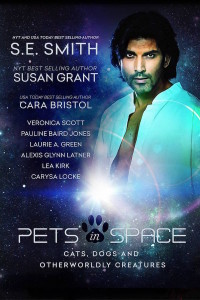 Even an alien needs a pet…

Join the adventure as nine pet loving sci-fi romance authors take you out of this world and pull you into their action-packed stories filled with suspense, laughter, and romance. The alien pets have an agenda that will capture the hearts of those they touch. Follow along as they work side by side to help stop a genetically-engineered creature from destroying the Earth to finding a lost dragon; life is never the same after their pets decide to get involved. Can the animals win the day or will the stars shine just a little less brightly?

New York Times, USA TODAY, Award Winning, and Bestselling authors have nine original, never-released stories that will capture your imagination and help a worthy charity. Come join us as we take you on nine amazing adventures that will change the way you look at your pet!

10% of profits from the first month go to Hero-Dogs.org. Hero Dogs raises and trains service dogs and places them free of charge with US Veterans to improve quality of life and restore independence.