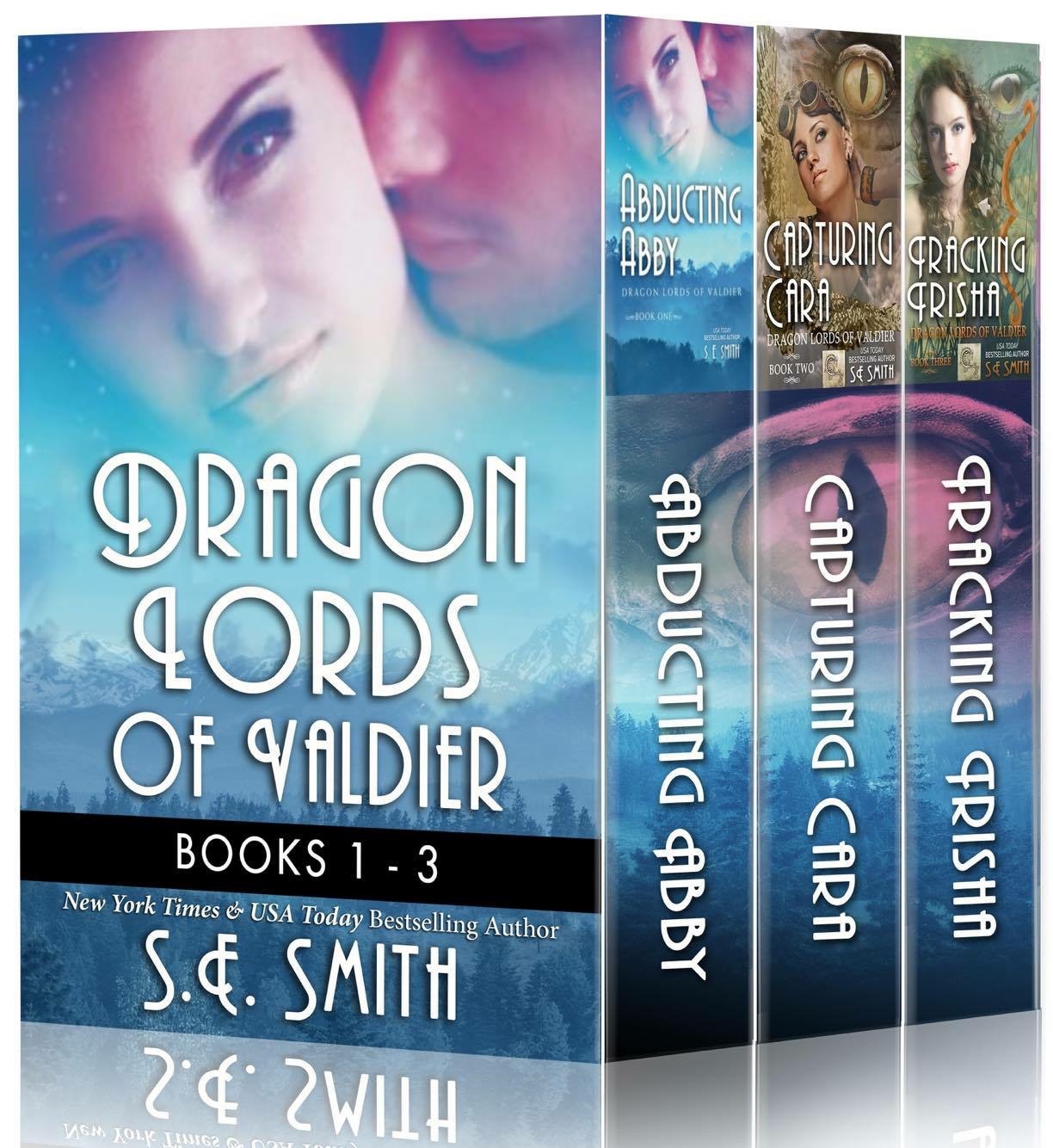 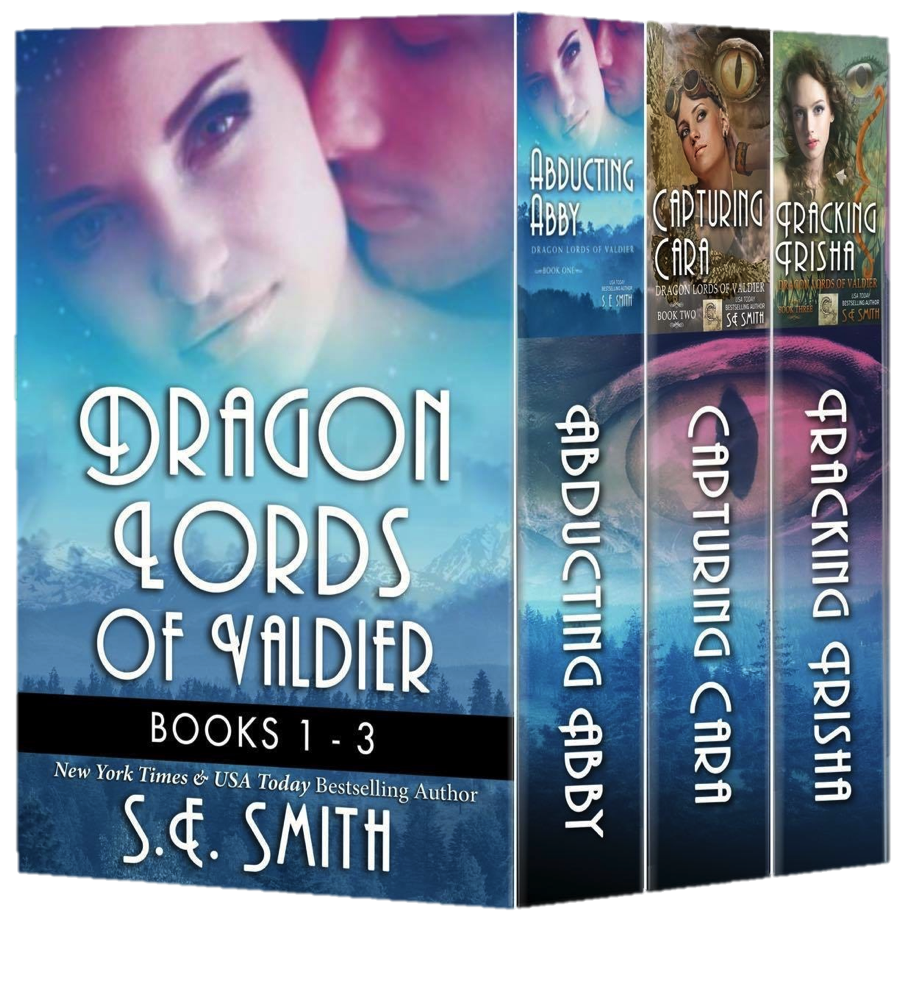 The Valdier world, an alien species who are dragon-shifters, is about to change forever when the dragons warriors discover their true mate can be found among the humans.

To buy each individual book or audiobook, click HERE to go to the Dragon Lords of Valdier series page.

Want to try a sample of the Dragon Lords of Valdier, the New York Times/USA TODAY Bestselling series that everyone is talking about? Books 1-3 are now available in a boxset - why not curl up with the boxset today!

Dragon shifting race with a golden symbiot. The Valdierians are ruled by the Reykill royal family. They battled the Curizans and Sarafin species during the Great Wars but have now established peace. There are few females on Valdier and only their true mate is accepted by the three parts of the warrior: the man/woman, their dragon, and their symbiot.The first three books in the Dragon Lords Series are now bundled together! The beginning of an epic saga! Discover new worlds, clashes of cultures, schemes of power, revenge, rescues, and above all, hope….

Book 1: Abducting Abby
Abby Tanner is content to live on her mountain creating her beautiful works of art and enjoying the peace and quiet. All of that changes when a strange golden space ship crash lands on it. Now, Abby has to deal with a golden ship, a tortured alien, and an insane local sheriff.
Zoran Reykill knew he had to find a safe place to heal after he escapes from a Curizan military post. When his symbiosis Mothership takes him to an unknown planet he finds more than he expects – he finds his true mate. The only problems are Abby doesn’t understand a thing he says and the local sheriff wants her, too. There is only one thing the King of Valdier can do, abduct his true mate.
Now Zoran has his hands full trying to keep his true mate safe in his own world while trying to help her accept her new life. He will need all the help he can get to help his stubborn human accept she can make a life in a place other than her mountain back on Earth. He just needs to keep her alive long enough to enjoy it and away from the other males on his planet who wouldn’t mind helping her accept her new sensual body.
One thing he knows he will never regret – abducting Abby.

Book 2: Capturing Cara
Cara Truman is a pint-size pistol whose inquisitive nature has gotten her into trouble on more than one occasion. Her next adventure takes her farther than she ever expected when she ends up on a journey out of this world.
Trelon Reykill thought he had his hands full. A militant group of Curizans had captured his brother Zoran, and he was busy trying to fortify the Valdier defenses against the Sarafin Warriors, even as his dragon was roaring for him to find a mate. He was furious about the first, excited about the second, and pissed about the last. The last thing he expected to find on the primitive planet his brother has taken refuge on was his true mate.
Now, he has a whole new set of problems… capturing Cara long enough to make her his. His symbiot loves her, his dragon wants her, and he can’t catch her. On top of all that, someone is trying to kill her.
His solution: Capture Cara and love her so well she will never want to escape him—if he can.

Book 3: Tracking Trisha
Trisha Grove enjoyed her job as a pilot for Boswell International but realized something was still missing from her life—her family. She is ready to call it quits and head back home to Wyoming where her father lives. She never expected her last flight for Boswell would end with an unplanned trip out of this world. Trisha isn’t sure at first what is real and what isn’t; all she knows is that she is determined to get back to her dad no matter what it takes.
Kelan Reykill is the fourth son in the royal line of Valdier. Commander of the V’ager, one of the largest Valdier warships, he prides himself on his strict self-discipline, his ability to remain in command in any situation, and his skill at handling any challenge. That is, until he meets a stubborn human female from the primitive planet his older brother sought refuge on. Now, all he can think about is how to get the female into his bed and under his control while staying in one piece.
When she is taken from him, Kelan will track Trisha to the ends of the universe and farther, because he knows one thing. She is his true mate, and he will do anything, kill anyone, who tries to harm her.