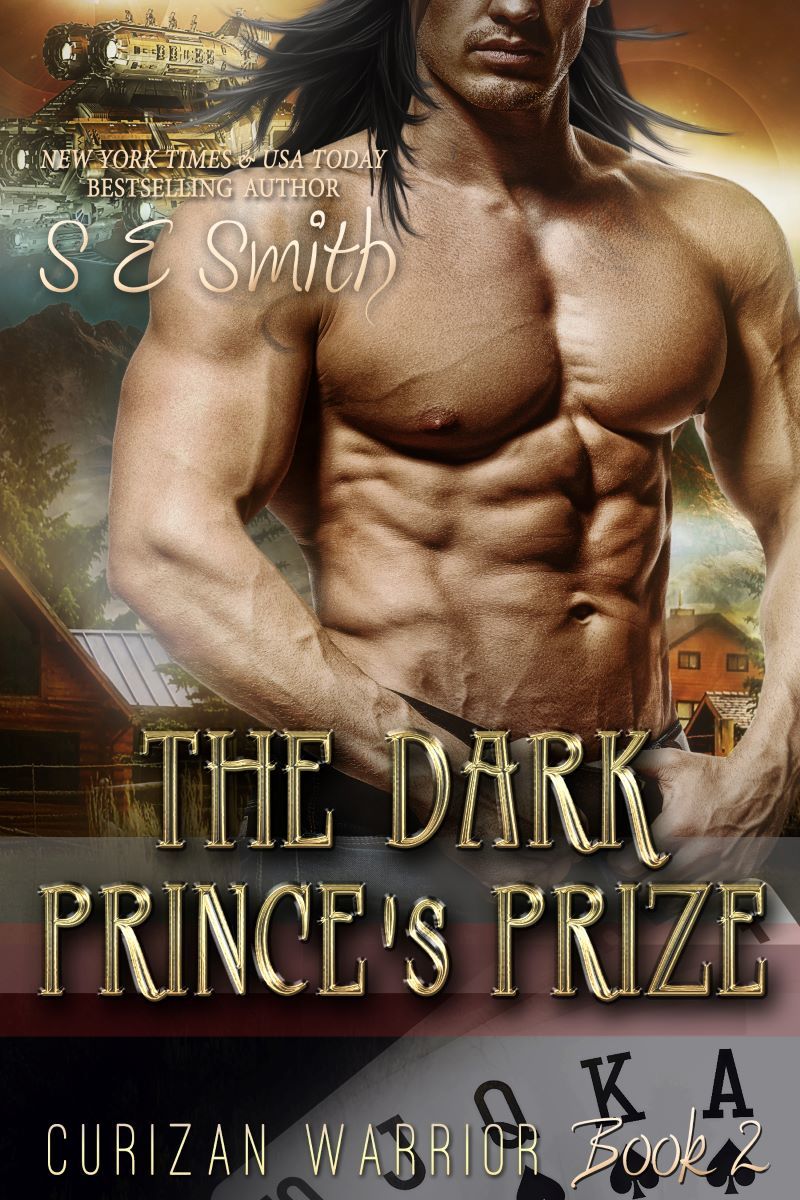 This time, there would be nothing that could prevent him from claiming his prize—except the prize herself.

Prince Adalard Ha’darra’s mission is simple—stay out of trouble while on Earth. His plans to enjoy his time with a few pleasurable distractions change when his transport is sabotaged, forcing him to land miles from Paul Grove’s remote ranch. When a stranger stops to give him a lift to his destination, he sees the colors of her aura and is stunned to discover his mate!

Samara Lee-Stephens has lived with the Lee-Stephens curse her entire life. Determined to break it, she focuses on earning enough money to one day leave her family’s reputation behind. She is furious when her stupid brothers drag her into their messed up lives—by losing her in a poker game! As if her life wasn’t complicated enough, she soon finds herself fascinated by the Grove ranch’s newest client who claims to be an alien prince!

“The Goddess’s gift to my species is the ability to manipulate energy. Each Curizan possesses a different level and skill, but we are all capable of creating minor items from the energy surrounding us,” he explained.

She looked at him with a startled expression. “Like magic?” she asked.

He shrugged and fingered the thin material covering his transport. “I guess some may call it magic. The Curizans are known more for our technology. For centuries we promoted that idea, but our technology is enhanced by the energy we are able to harness,” he continued.

She ran her fingers along the outer hull of the ship. “So, what can you do with the energy besides create a huge bedsheet and teleport—oh, and heal?” she asked, turning to look at him while touching the side of her head at the same time.

He chuckled. “As a member of the royal family, I have more power than most,” he said.

She grinned. “What is one power that you have that you are the most proud of?” she curiously asked.

His expression softened and he reached out to caress her cheek. “Finding you,” he confessed.

“What kind of power is that?” she skeptically inquired.

“The most powerful of all,” he softly responded before he pressed a kiss to her lips.

Today I have a special guest on my blog. Cassandra Chandler, fellow author in the Pets In Space 6 anthology, is here to tell us about her pet in space, Bandit. USA Today Bestselling author Cassandra Chandler uses her vivid imagination to make the world more interesting, spawning the ideas she turns into her enthralling Science Fiction Romances and darkly evocative Paranormal and Urban Fantasy Romances.

Cassandra’s story in Pets In Space 6 is Trade Secrets from her The Department of Homeworld Security series.

I’ve been having so much fun writing the adventures of the aliens and Earthlings who meet and fall in love in The Department of Homeworld Security series. It’s always great to meet new characters, both main and tangential. With fifteen titles in the series, there are a lot of them!

I can’t help having favorites, like the adorably sweet Vegan, Cyan, or the jovial, yet temperamental, four-armed Lyrian, Craig. Right up there at the top of my list is a simple Earth cat named Meredith and her three not-so-simple kittens.

The mystery of the space kittens has been developing for quite a while now—ever since the three of them gained the ability to move around the Coalition warship that they call their home. We first get a hint that something is a bit different about them when the calico kitten, Patches, meets an Earthling named Buddy, who accidentally stowed away on their ship in Homeworld for the Holidays. Patches looks like an Earth kitten, but the more they interact, the more Buddy realizes that she’s much smarter than any cat he’s ever met—and maybe some of the people!

It’s been really fun playing with this storyline. The aliens, who have limited experience with cats, just assume all kittens are this way. Meanwhile, when Earthlings spend any time with the “space cats,” they almost immediately see that these kittens are extraordinary.

After her encounter with Buddy, I started thinking about Patches’s siblings more, and that’s when I met Bandit.

With his marmalade tabby looks, Bandit takes after their dad—an Earth cat named Freddie that we met in Export Duty. I love orange and white striped tabbies! As far as temperament, Bandit is much more like his mom, Meredith. He’s content to be with the people he loves and just wants to give and receive affection.

Having one incredibly rambunctious sister and another who’s incredibly…ambitious sometimes gets in the way of spending quality time with his people, and he can end up in the middle of his siblings’ arguments, trying to sort things out. Most of the time, he tries to avoid them entirely by hanging out with his absolute favorite person, a Sadirian named Xan.

As a pilot, Xan gets to leave the ship a lot. Bandit is Xan’s constant companion on those expeditions, sometimes sneaking aboard and hiding to make sure he gets to join Xan on his missions. Xan loves having the company, especially on long trips when he’s just ferrying people around and has to wait for them to finish their business so he can take them wherever they need to go next.

When the pair meets Gwen, the Earthling quickly sees how special they both are, and it doesn’t take long for them all to want to form their own little family. But to learn more about that, you’ll have to read their story, Trade Secrets, in the Pets in Space® 6 anthology!

Bandit craned his neck back so he could look up at Gwen. He rubbed his head against her chin, purring loudly.

“Oh, sweetie, you shouldn’t do that,” Gwen said. “With my allergies, I’m going to have to take such a shower after this.”

Despite her words, she cuddled the kitten closer to her chest and kissed his head. Bandit’s eyes drifted shut and Xan swore he was smiling. He was also purring.

Gwen’s brow furrowed. “It’s weird. Normally, if I’m in the same room as a cat for a minute, I can’t stop sneezing. But you don’t seem to be affecting me at all even though you’re all up in my face.”

She cautiously sniffed Bandit’s head. He stretched his neck, butting his nose against her cheek, and Gwen laughed.

“He’s a space cat.” The words were out of Xan’s mouth before he’d really thought about them. Cyan and Zemanni both stared at him.

Xan shrugged. “Like anything we say at this point is going to make things worse.”

Get your copy of Pets In Space 6 and read eleven fantastic science fiction romances while helping Hero-Dogs.org!

Curl up with your copy here:

Also in the Series: